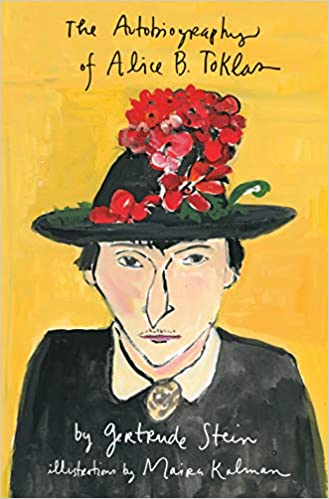 My March pick, Elisabeth Kushner’s The Purim Superhero, has recently appeared on several Florida banned book lists.  I was surprised at first.  You really have to go out of your way to go after a book about Purim; it’s not exactly the most well-known Jewish holiday out in mainstream America.  Then I thought the inclusion was a canny way to appeal to homophobic Jews who don’t want our hero Nate to have an Abba and a Daddy, especially ones as knowledgeable and involved in their children’s Jewish lives as Nate’s are.  In an inclusive Jewish community, Nate’s not the only Purim superhero in his family.

My book pick for LGBTQ Pride Month is not a new one, but it’s recently had some new life breathed into it.  American Jewish artist Maira Kalman has recently illustrated a new edition of novelist, poet, playwright, and self-described genius Gertrude Stein’s classic memoir, The Autobiography of Alice B. Toklas.  Dozens of lavish full-color images bring new life into Stein’s story of her love affair and partnership with Alice Toklas, from their meeting in Paris in 1907 into the early 1930s.  Stein and Toklas, both upper-middle-class American Jewish girls who had left the U.S. behind for Paris, built a household together, a magnificent art collection, and a salon where modernist writers and artists mingled.

The Autobiography is chatty and casual, far different from the more experimental writing that Stein became known for.  Stein was the grande dame of 1920s Paris, mentoring Hemingway and Fitzgerald, championing the art of the Impressionists and Expressionists, and having Picasso paint her portrait.  Written as though through Alice’s eyes, Stein lets you in on all the good gossip about her friends, the Paris intelligentsia (who were not always best-pleased).

Maira Kalman’s illustrations help you see Gertrude Stein’s world in color, though in a style all her own.  Kalman, who has done everything from illustrate children’s picture books to mounting an exhibit based on her late mother, Sara Berman’s closet, adds whimsy to a long work and helps readers connect to a world that is becoming farther and farther away each year.

Also new in the library, just in time for Pride:  A Rainbow Thread: An Anthology of Queer Jewish Texts from the First Century to 1969, by Noam Sienna, and the Central Conference of American Rabbis’ Mishkan Ga’avah: Where Pride Dwells: A Celebration of LGBTQ Jewish Life and Ritual, edited by Rabbi Denise L. Eger.