The many hundreds of internment camps set up by the Nazis fulfilled different functions. Some, like Belzec, Chelmno, Sobibor, and Treblinka, were strictly killing centers. Some camps, like Auschwitz and Majdanek, were combination labor-death camps. Hundreds of other camps were labor camps.

People were transported to the camps by trains, which were often assembled from cattle cars, and many people perished en route to the camps. This exhibition shows the many areas from which people were transported to Auschwitz, the largest of the Nazi concentration camps. A cross made up of the Nazis’ main killing centers begs the question: “Where was God during the Holocaust?”

Images of people boarding trains headed to the camps and of “showers” (the Nazi euphemism for being gassed), as well as an image of the poison gas the Nazis used for killing their victims, are shown. Finally, an image of a crematorium with a human arm sticking out completes the visual account of life – and death – in the camps. 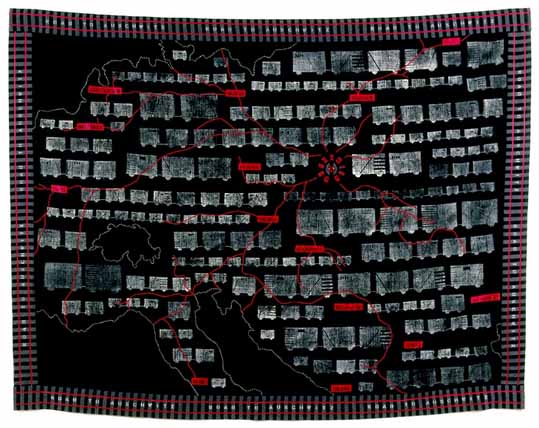 Road to Auschwitz: Maps of the Holocaust, 1988

This map shows the many roads that led to Auschwitz, the deadliest of all the concentration camps. From North, South, East and West, vast numbers of human beings were transported to their death at Auschwitz. The box cars covering the background symbolize the methodical way in which the Nazis pursued their goal of the Final Solution. 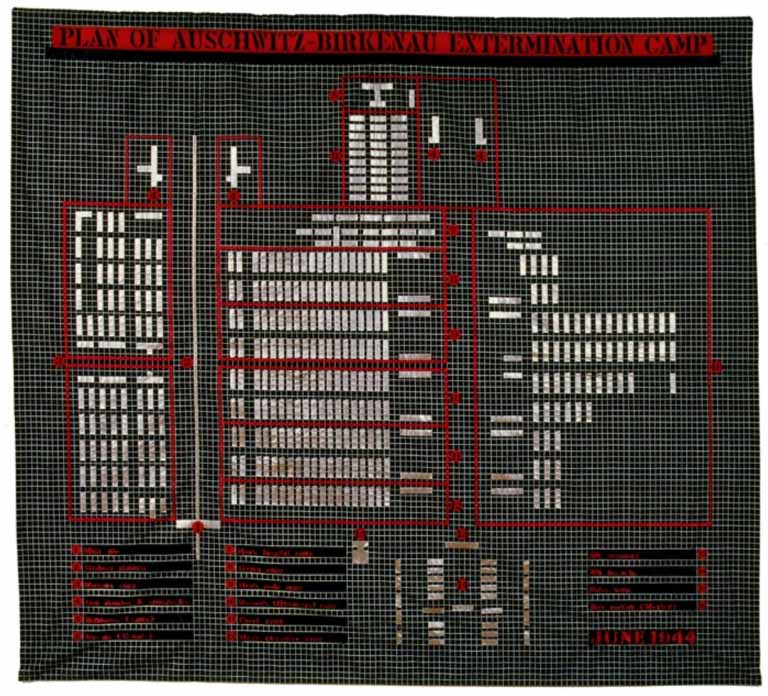 Plan of Auschwitz-Birkenau: Maps of the Holocaust, 1991

The layout of the Auschwitz-Birkenau camp, one of six killing centers set up by the Nazis following the Wannsee Conference, is portrayed in this work. Auschwitz was designed not only as a killing center but also as a forced labor camp. The ramp, where new arrivals were separated for life, which meant forced labor, and for death, is here represented, as are the huts where those selected for forced labor were crammed. Also indicated are the gas chambers. 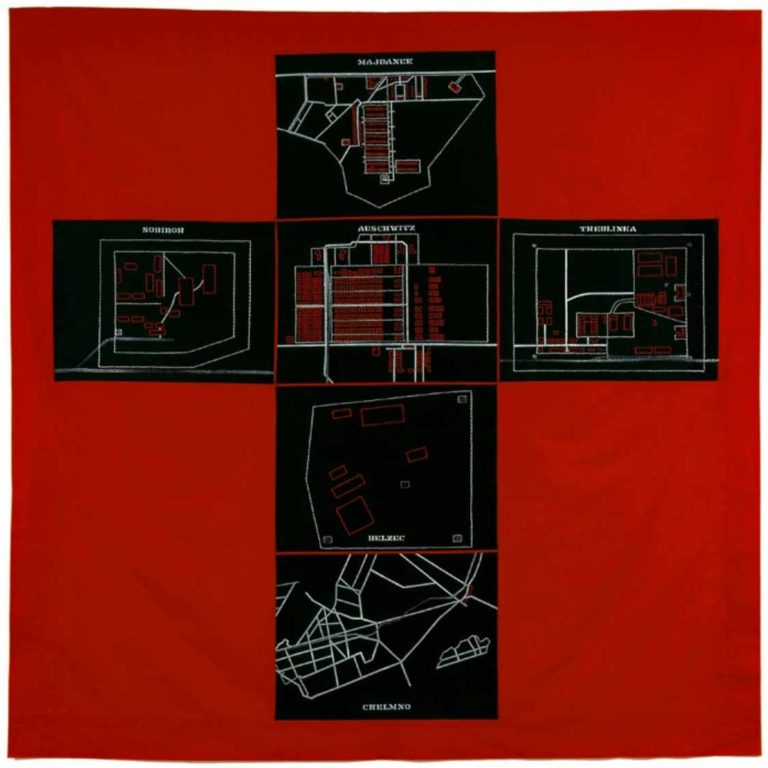 The layout of the six Nazi death camps – Auschwitz, Belzec, Chelmno, Majdanek, Sobibor and Treblinka – is presented in this wall hanging in the form of a cross. The image of the cross begs the question: Where was God during the Holocaust? 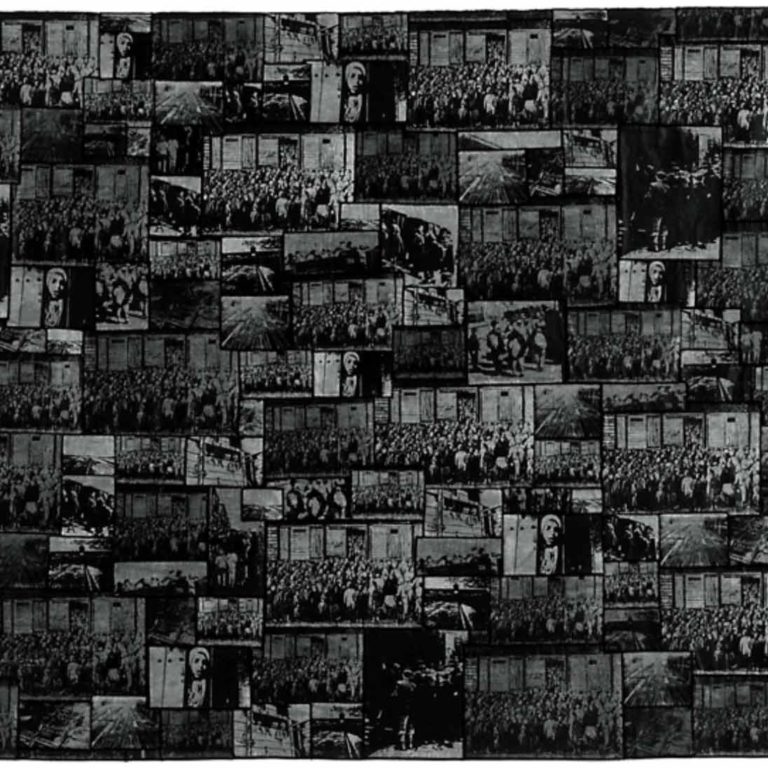 Boarding: Scenes of the Holocaust, 1994

Images – both photographic and art – of people boarding trains vie with one another for attention in this collage. The repetition of the images is designed to underscore the fact that what happened in the Holocaust happened repeatedly. 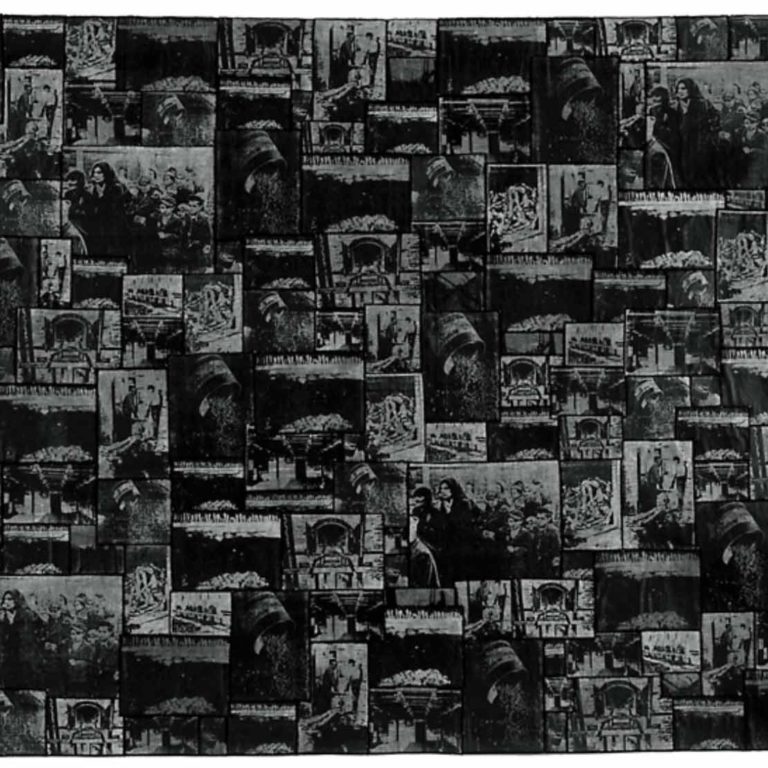 Showers: Scenes of the Holocaust, 1994

“Showers” was the euphemism used by the Nazis to lure unsuspecting victims into the gas chambers. Photographic as well as art images related to the gassing and cremation of human beings form a patchwork of images claiming attention in this wall hanging. The repetition of images underscores the universality of the deceptiveness and brutality employed by the Nazis. 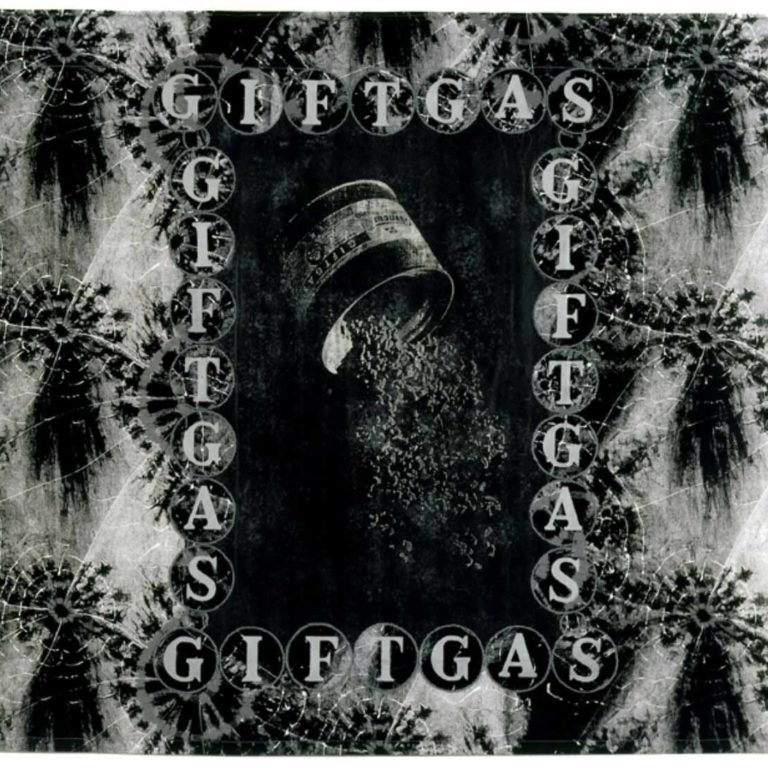 Giftgas: Scenes of the Holocaust, 1994

“Giftgas” is the German term for poison gas. Pictured in this wall hanging is a can of Zyklon B gas pellets, of the kind used by the Nazis at camps such as Auschwitz to gas millions of human beings. The term “Giftgas” is clearly visible on the can. The pellets were thrown by Nazi functionaries through an opening in the ceiling of the gas chamber and would turn into poison gas upon contact with the air, suffocating those trapped in the sealed chamber below. This method of mass murder was especially de- vised by the Nazis in pursuit of their goal of the Final Solution, namely, the annihilation of the Jewish people. 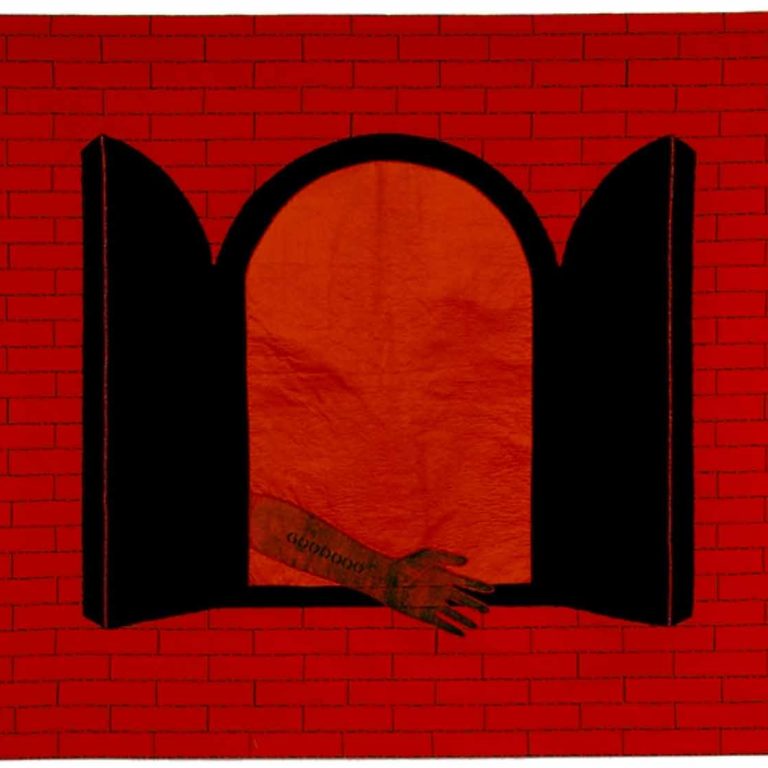 The image of an arm protruding from a crematorium underscores the crematorium’s human connection. The arm here, like the arms of millions in the Holocaust, bears a tattoo. The tattoo reads “6000000” – reminding us that six million Jews perished in the Holocaust.