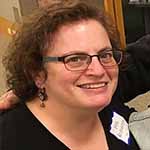 Jane began arranging and researching The Temple’s archives as a volunteer upon returning to Cleveland in 2014. She holds a BA from Brandeis University, an MA in U.S. history from Case Western Reserve University, and an MSLIS in Library and Information Science and a Certificate in Archives and Records Management from Long Island University. She pursued advanced graduate study in U.S. and Jewish history at New York University.

Before returning to Cleveland, Jane worked in the archives at the American Civil Liberties Union and New York Public Library and taught American Jewish history and Jewish studies to students of many ages at New York University, the Center for Jewish History, Texas Christian University, and the National Havurah Committee’s Summer Institute. Upon returning to Cleveland, she worked at Appletree Books in Cleveland Heights and she serves on the steering committee of the Cleveland Archival Roundtable and the board of the Jewish Genealogy Society of Cleveland.

Jane grew up in University Heights and now lives in Beachwood, just a few blocks away from her sister, brother-in-law, and two
amazing nieces. She reads constantly, knits as much as she can, loves photography, researches her family history, obsesses about
comics, and collects haggadot.